Lotions Made From a Chocolate 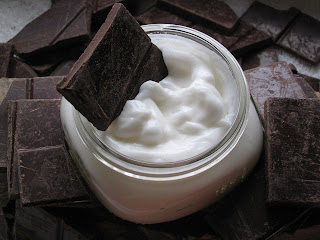 Are you addicted to chocolates? Ever dream of having to put chocolate on your body? What do you think are the benefits of chocolate lotion in your skin? Is it possible to do it even at home? These are just some of the things that might keep you wondering. However, it might be surprising to know about the presence of chocolate lotions. Some lotions made from chocolate are already available in the market. You might be wondering about the uses or significance of it.

A chocolate lotion is a body lotion used for moisturizing. It nourishes the skin by providing certain vitamins such as Vitamin A which removes dead skin cells. It also has an anti-aging property and protects the skin from the ultraviolet rays of the sun. Another component is Vitamin E, an antioxidant, which fights off free radicals such as pollutants; Vitamin B which can help even your skin tone and prevents acne. Chocolate lotion also acts as a tanning lotion because of its skin-darkening properties. Having an antioxidant properties, chocolates thus prevents cellular damage that can lead to cancer, aging, and other diseases.

There are two kinds of chocolate lotions already present in the market. Among such are Cocoa Butter Lotions and Chocolate Massage Lotions.

Cocoa Butter Lotion
A cocoa bean utilized in chocolates is used as a lotion due to its antioxidant properties. It is also favorable because of its pleasant aroma. So what do you think are the benefits of using this type of chocolate lotion?

Cocoa Butter Lotions are beneficial in providing moisturizing effects as well as in providing relief in different skin conditions such as rashes, skin irritations, inflammations, and psoriasis, an autoimmune skin disease characterized by red, dry flakes and scaly skin. It is also beneficial for the prevention and improvement of stretch marks. It reduces their appearance and gives moisture in order to develop collagen, a substance to increase skin elasticity, and prevents dryness of the skin.

Chocolate Massage Lotion
Chocolate massage lotions are used as an aromatherapy which gives a pleasant chocolate smell and acts primarily to lubricate the skin while enjoying a great massage. Cocoa butter is also added as an ingredient accompanied by almond oil to enhance the lubrication. You can do this even at your home by using the double boiler method. Heat the cocoa butter, add the almond oil, and then lastly, add your chosen flavored essential oils. The main importance of this kind is giving moisture to the skin and relaxation of the body.

Whether for aesthetic purpose or relaxation, chocolate lotions are very essential for the skin. It gives nourishment and tone which is a big factor in choosing your own lotion. It is very amazing that chocolates, especially the main ingredient cocoa, are not only for eating but also have many uses and even gives nutrition for the body.

Why Chocolate at Easter? Why Not! The History of Popular Easter Eggs 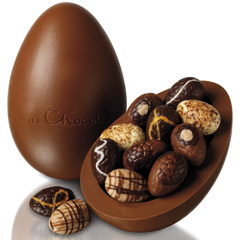 Eggs have been a symbol of life, fertility and rebirth since people first began to eat them. Some believed that the golden yolk of an egg symbolized the sun which was necessary for life and later, as they turned to agriculture, for crops to grow. In creation myths from China and the Indian subcontinent there is the common theme, the idea that the world was born from a "Cosmic" egg. There are also Norse myths of creation which feature them.

The giving of eggs in spring began in pagan times, as they were connected in popular beliefs as embodying the sun (the yolk), so when the sun began to shine again after a long, cold winter, people would celebrate the sun's return.

Christians adopted the pagan practice of giving eggs at Easter as for them the egg symbolized the resurrection of Christ, just as before Christ eggs had signified the return of the sun which would ensure the fertility of crops in northern climates.

The eggs might have been dyed red or other colours- charcoal was used as well as bright dyes from plants. Orthodox Christians still dye eggs red in Greece and Russia, and Easter is the most important day in their calendar- having more importance than Christmas.

In some Slavic countries eggs were hand painted rather than dyed and as time passed, they became more lavishly decorated. Faberge took decorated eggs to a more elevated level with those he created for the Russian royal family during the 1899s up until 1917 and the overthrow of the tsar. These were jewel encrusted and made with precious metals, sold today for vast sums, and highly prized in the museums where they are housed.

The chocolate Easter egg is a relative newcomer in the history of egg-giving in spring, as they were first made in Europe in the early 19th century by French and German confectioners. Some of these early ones were solid as the process for molding chocolate had not been developed. The first molded ones were difficult to make as the chocolate paste had to be spread into individual molds by hand.

It was the Dutch who first invented a press to separate cocoa butter from cocoa beans in 1828, and this enabled manufacturers to make more chocolate as well as Easter eggs. The first were made of dark chocolate, as milk chocolate only appeared on the market at the beginning of the 20th century.

Now of course, chocolate Easter eggs are big business for chocolate manufacturers in the West, as every child is given one at Easter. The symbolism may have been forgotten, but the tradition of giving eggs in spring is one which has been carried on down the centuries. The type of egg has changed, but not the gift.